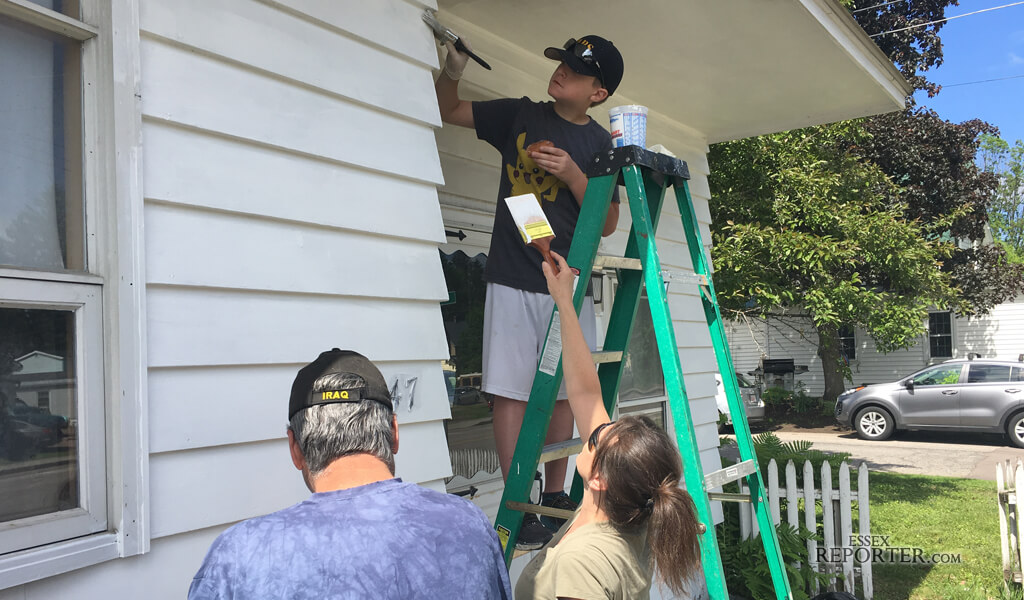 The Essex home of Vermont’s oldest World War II veteran is looking spiffy thanks to members of the local Veterans of Foreign Wars Post and a few volunteers, including Gov. Phil Scott.

The home of Harold Bergeron, 103, of Maple Street was scraped and painted over the weekend by about a dozen sets of hands all pitching in.

"It is so nice of them to do this,” Bergeron said as members of the work brigade went about their respective duties. His daughter, Ann Yandow, was equally impressed.

Some scraped. Some caulked. Some painted. Some cleaned windows. Some fed the troops. One neighbor, who had read about the project in The Essex Reporter, stopped by with fresh doughnuts in the morning.

One surprise volunteer was Gov. Scott, who showed up in work clothes and spent two hours working hard. Sunday afternoon, he was high on a two-story ladder scraping paint off the backside of the home.

Scott, who as lieutenant governor adopted jobs for a day to learn more about Vermonters, seemed to enjoy a day off from the Statehouse.

Bergeron, who worked at Archie Myers’ Fiat dealership as parts manager for 16 years, has lived in the house for 55 years. His wife, who died in November, would have been 105 years old on the workday. They were married for over 70 years.

"My mother lived to 103,” Bergeron said when asked about his old age.

Butch Burns, a member of Post 6689 on Pearl Street, said the scraping began on Friday afternoon for a few hours, and all the painting was completed on Saturday. He said there is talk about returning and adding a second coat of paint to the front side.

Bergeron, who grew up in Colchester, graduated from Essex Junction High School. He served three years in the U.S. Army. He was serving in England and his troop was headed to the Battle of the Bulge when their ship was sunk by enemy fire. Bergeron said he was able to make it a nearby destroyer, but 800 lives were lost, including 32 men from his company.

All the records for the soldiers sank to the bottom of the ocean, and he said he was assigned to recreate all the files.